The ANC’s step aside deadline came into effect on the last day of April, with the ruling party’s embattled Secretary General being the one the members expected to step aside.

Viewed by some as a clean-up campaign by the governing party, those opposed to it may want to put up a fight which could derail the President and his Cabinet in implementing the much needed structural reforms and economic recovery plan.

South Africa seem to have new COVID-19 cases and deaths under control, with the 7-day average 1175 at the end of April, and daily death toll at just over 40, from 550 at the height of the second wave in mid-January. i

The Sisonke vaccination program is moving at a snail’s pace with only around 300 000 jabs administered at the end of Aprilii, however this is expected to pick up pace, with the country receiving its first Pfizer batch and more expected to arrive in the coming weeks.

The vaccination program is the best hope in getting things back to normal. With South Africa heading to local government elections later this year, large gatherings and low number of citizens vaccinated might trigger a 3rd wave.

The South African equity market continued its strong performance into the month of April, with the broader index gaining over 1%.

The property sector continued its road to recovery with the S&P property composite recording an 11.49% return for the month. The energy sector was the underperformer, the sector posted negative returns of 2.71% for the month of April, in the contrast to the Information Technology sector, which posted strong gains of more than 15%iii.

The US economy grew by 6.4% in first quarter of 2021, fueled by the vaccination program (which stabilized new cases) and government spending. This was the best quarter in almost 18 yearsiv.

President Biden’s first 100 days have passed – the leader of the world’s most powerful nation has tabled a $2.3 trillion infrastructure program, which will be funded by corporate, top marginal income and capital gains tax.

This was received with mixed responses, some believe that the tax hikes could hurt company earnings and economic growth.

US equities ended April in positive note, the S&P 500 posted a more than 5% gain, this was boosted by robust earnings and changing economic fundamentalsv.

Growth and Real Estate shares were the star performers with gains of 5.34% and 8.28% respectively.vi

US fixed Income were positive across the board.

The Eurozone economy contracted by 0.6% in the first quarter of 2021, caused by the lockdown restrictions during the 3rd wave of COVID-19 infections.

The Eurozone’s heavy weight economy Germany contracted worse than expected by 1.7%. In a Reuters survey, analysts expected the economy to contract by 1.5 % for the quarter.

The French economy posted a better than expected positive GDP number, the Eurozone 2nd biggest economy grew by 0.4% in the first quarter of 2021.

UK Equities ended April on a good note, with gains of more than 4%. All major European indices had a good April with exception to the energy sector, even though most of the energy sector companies posting better than expected earnings they failed to lift the sectorvii.

Most of the European fixed income indices, with the exception of UK bonds, were marginally negative. This may have been caused by asset class rotation and the prospect of rising inflation and economic recovery.

The COVID-19 situation worsened in India in April, the fatality ratios has doubled since mid-February. With the government introducing stricter restrictions this might cause the 6th largest economy in the world to contract in the second quarter of the year.viii

The Chinese economy grew by a record 18.3% in the first quarter of 2021 – this was mostly due to base effects, as the world’s 2nd largest economy was in lockdown the same time last yearix.

The broader MSCI emerging market index had a good April with gains of 2.5%x.

The Taiwan market was the star performer amongst its emerging markets peers – the Taiwan broader market index posted more than 6 % gains for the month of April.xi

OUT funds performed very well in the month of April.

The CoreShares OUTmoderate Index Fund also had a good year ending the month of April, the fund returned more than 26% for the year and managed to beat 82% of its peers for the year ending April.

The CoreShares OUTstable index fund also gained more than 2 % for the month of April , the fund managed to beat 65% of its peers 3 years ending April 2021.

The CoreShares OUTcautious index fund managed to outperform 85% of its peers for April, the fund also returned more 1.87% for the month April. 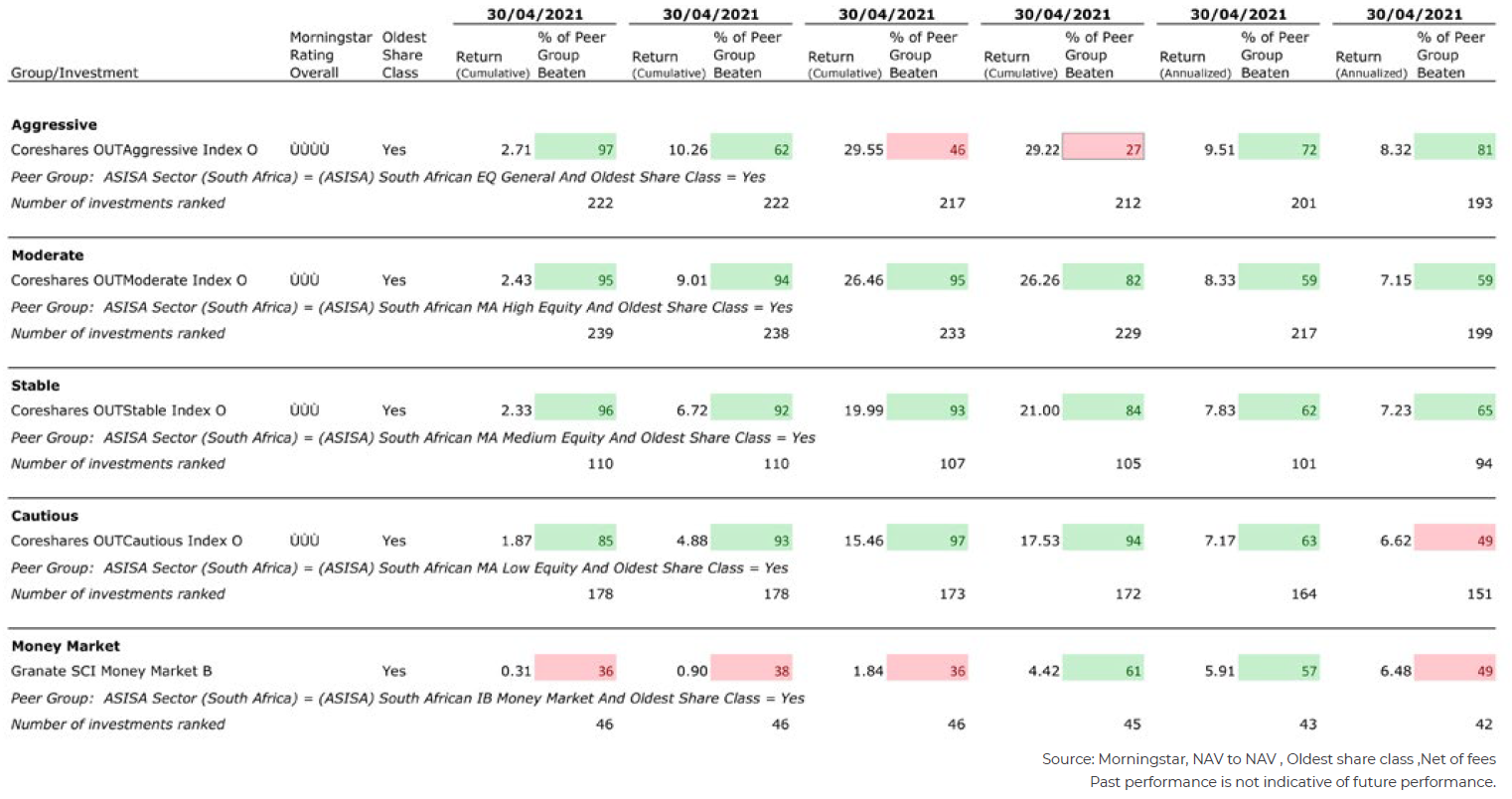 We use cookies to optimise the user experience. Tell me more